Being an introvert with a tendency to be shy, the thought of performing on stage in a strange country must be frightening. Dublin-born Claire-Ann Varley found herself exactly in that position before she met her band mates Joschka Bender and Matthias Heising.

“For a long time I just wanted to be a songwriter. I didn’t see myself on stage singing in front of strangers”, Claire-Ann remembers. “But I worked on that and Joschka and Matze helped a lot with that.”

Initially influenced by Bon Iver, and citing the likes of Fleetwood Mac, The Cardigans and Phoebe Bridgers as other notable touchstones, what lies at the core of Varley’s affective, heart-on-sleeve music is its willingness to be vulnerable. Their music is an honest and raw outlet, and the cathartic nature of their songwriting is one to be championed.

“I feel like a lot of the time I don’t actually process a lot of my feelings, but then I just jam with a guitar and things come out. These guys are my best friends so it’s easy to be open with them.” Claire-Ann shares.

Written and recorded in the shadows of 2020’s first lockdown the tracks of their debut EP “Smalltalks and DMCs” are charged with a familiar feeling of inner turmoil and provide a bunch of relatable messages for all the people who overthink. And these people ain’t rare among Varley fans. “It can be intimidating when everyone knows what you think but when I get a message from someone who feels the same or relates to the song I get the feeling that our music helps somehow”, Claire-Ann tells.

Between those ideas of fear and fight, introversion and confrontation, Varley’s debut reveals all sides of the band’s members. “It’s like therapy”, says Claire-Ann. “When we put our feelings to paper it feels good to get it off our chests.”
“And we think it’s a sign of strength to be able to talk about your feelings”, the boys agree.

“In the end this LP is supposed to give hope and a feeling of belonging. And the permission to love ourselves just the way we are. It’s a journey, but we go together”, the band concludes. 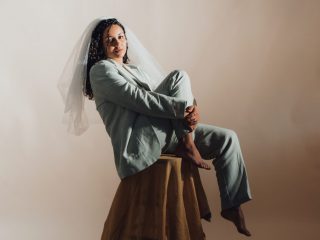