~„I was the passenger, now I’m a pilot“ ~ Turns out this is more than just a line in a dreamy indie pop anthem. Emma Elisabeth has taken the wheel and become the pilot of her own life, and her album „Melancholic Milkshake“ is the act of emancipation that comes with it.

Emma Elisabeth Dittrich was born near Malmö, Sweden in July 1984. Both her parents are musicians, allowing a young „Betty“ to start playing and making music at an early age. She sings in a choir, takes piano lessons, buys her first electric guitar, starts bands and eventually ends up studying at the renowned Kulturama music college in Stockholm. Next thing you know she goes on tour through Japan with her very first power pop band „Shebang”. Simultaneously she starts writing her own solo material and after going on an exchange semester in Germany in 2010 she ends up settling in Berlin.

Her first musical breakthrough comes with what started as a side project with german lyrics: signed to EMI she releases an album under the name „Betty Dittrich“ and takes part in the pre-selection of the Eurovision Song Contest. Her 60’s, France Gall inspired Grand-Prix Pop is however only the beginning of her artistic development and actual musical ambitions. In 2016 she releases the DIY album „Cover Stories“ which contains songs by legends like Lou Reed, Bob Dylan, Fleetwood Mac and Daniel Johnston. After a hard landing in the music industry this project functions as a way to break free and explore new and uncharted waters. Regardless of past struggles, Emma Elisabeth looks back at her time as „Betty Dittrich“ with coolness: „I am extremely thankful for that time in my life. It’s important to try things out and to learn from it. And through this I’ve learned that I’d much rather do things myself and make less compromises. I want to produce my music, trust my own gut feeling and be less dependent on the opinion of others.”

Today the musician is using her professional experiences and creativity to write songs for other artists and projects as well. Emma Elisabeth has collaborated on releases by artists like RAF Camora, SVRCINA and Thorsteinn Einarsson. She has written with a plethora of different musicians and even explored working on film music („High Society“, 2017). An impressively genre-spanning spectrum, all the while her solo project seemingly belongs in a sacred chamber of its own.

The tracks on „Melancholic Milkshake“ are a mixture of songs written in solitude and collaborations with other musicians; her anthemic folk-pop track „Cavalry“ was created together with Petter Ericson Stakee from Alberta Cross. And on two of the album songs she worked with former Franz Ferdinand member Nick McCarthy. „As much as I love writing songs all by myself  I also enjoy writing together with others, to bring in strange colors and nuances“, says the 34-year old. „If I only sat alone to write, eventually I’d start repeating myself “. The album features musicians like drummer Earl Harvin (Tindersticks, AIR), bass player Christian Kuehn and Petter Erikson Stakee. It was produced by Emma Elisabeth and mainly recorded out in her rehearsing room studio deep in East-Berlin. Parts were done at Victor Van Vugt’s studio  (Nick Cave, PJ Harvey), who later mixed the entire album.

Live, Emma Elisabeth takes the stage with a full band as well as playing intimate solo concerts – wild yet controlled and elegantly messed up. Recent support shows with bands like Sunflower Bean, L.A.Witch, The Japanese House and Hannah Epperson aren’t the only proof of that; She was also an official showcasing artist at SXSW 2019 for the second year in a row.

Detuned analogue synthesizers bring in an 80’s vibe and her lush interlacing vocal harmonies are a nod to classic 70’s pop. All together it’s a bit as if Patti Smith and Dolly Parton went on a road-trip from New York to California and picked up Fleetwood Mac and Mazzy Star along the way. She mixes Jangle- with Alternative Pop, Americana and Country and creates her very own intuitive sound with effortless vintage charm. Emma Elisabeth calls it „Unpolished Pop Songs“ and refers to artists like Jenny Lewis, Sharon Van Etten and Sunflower Bean as modern day heroes of classic songwriting and organic sounds in the otherwise quite polished world of pop.

Just like her EP „We Gotta Talk“, released in 2017, Emma Elisabeth’s melancholy drenched album got its final gloomy touch by Victor Van Vugt (PJ Harvey, Nick Cave). Songs like „I’d Be Lying“ and „What a Waste“ summon the spirits of Rock’n’Roll while the hauntingly intimate electric guitar ballad „Into the Blue“ and the lascivious „Head Over Heels“ both incorporate elements of the blues. „Melancholic Milkshake“, however, still manages to never lose its pop vibe, like in the final track „Great Pretender“, where a reverb-drenched organ carries the vocals through an emotional abyss. Emma Elisabeth wrote that song the night that her ex-boyfriend suddenly broke up with her and left. Instead of going to a psychotherapist, the musician processes experiences by writing songs. In that vein, „Melancholic Milkshake“ turned into a break-up- and moving-on-album, but one that lets melancholy get carried by a strong and self empowering undertone. The song that was somewhat of a starting point for the album is now the closing track; Leaving space for „Pilot“ – the opener that kicks off „Melancholic Milkshake“ and sets Emma Elisabeth off on her determined way towards greater things – she was a passenger now she’s the pilot … 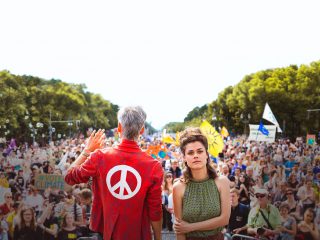